This Novel "If  God was Banker " is another substantial stuff on the theme of bankers by Ravi Subramanian which become as one of the best seller of India . Ravi Subramanian is an alumnus of IIM -Banglore working with  a  leading foreign Bank in its Retail Banking unit. In  a career spanning close to 14 years,he has worked with several MNC banks and now live in Mumbai with his wife and daughter.This is his first novel. 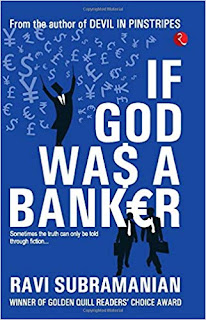 As  alike of his life, the story deals with the corporate life of bankers in a foreign of Two young manangement graduates Swaminathan (a Tamil Brahmin)and Mr. Sundeep Srivastav ,with nothing similar in family background and temparament. Swami belongs to a financially weaker family whereas Sundeep from a well family from Delhi. Both have completed their graduation from Indian Institute of Management from Ahmedabad and Banglore respectively.Both of them join New York International Bank(NYB),this is the first time when they met and from the same day ,take entirely different routes to success. 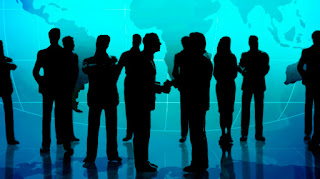 Both rise up and praised by the Branch Head for their incredible idea of retail banking  which had evolved as the best  in the field of  Insurance and make a good profit to the Bank .This also make Sundeep and Swami as the real hero of the Bank in a short period of time ever .
The fast and agressive Sundeep, who will stoop to anything to get ahead ,and mature and sensible Swami who always stick to hos moral, ethics and honesty. Swami get married to his fellow mate Kalpana who likes him coz of  his honesty whereas Sundeep got married to his frienldy boss secetary,Natasha .

Sundeep lead to high success and become country head of Retail Banking  in his career due to his link with Ram Naresh, a mediator in NYB. But Swami sticks to his morals to ensure success in his career .

The story also has a main character,Aditya Roy(Branch Head) who is a friend and counselor to both of them and he has his own philosophy which is based on his experience and is genuine. He always taught what he deemed right.

A Through the novel, the backdrop is the corporate bank environment, which is so polluted that the characters are portrayed as people who are ready to deviate from the righteous path at the drop of a hat. Women throw themselves at their bosses to advance their position.

Despite of Sundeep amazing life as being the head of Retail Banking,he always tend to seek  more profit through any means and also release some attractive  offers in order to accomplish his target despite of customer losses.
In this sequence of time Swami is shifted to B.P.O  industry(Call Center)  of the bank but despite of this ill sequence of work done by Sundeep ,Swami never loses hope and always consider Sundeep as his best wisher.He also become a successful leader in B.P.O industry. After Swami's  hard effort the NYB again become the leading foreign bank in India and also again won over the hearts of Indians.
As there is old saying

A probe was conducted by NYB in Indian Branch to actually know the reason behind the rapid falling of Indian Market .And the fact that came out astonished everyone even Aditya,Sundeep was exposed and he was thrown out of New York International Bank (NYB).
This is the first time when Sundeep feel embarassed of his own doing.But Simultaneously, he was hired by Aditya in his company as he respect Sundeep's intellegence and they flew back to their homwland,India aling with Natasha .
After all this Sundeep become loyal to himself and also to his wife .Aditya's company got listed ,has become one of the largest and most admired software service and back offices processing in India .
Swami has been nominated as the interim CEO of the Indian Branch

I recommend all my readers to have a nice read to this amazing story novel.And I am sure that you will find
it amazing and had great learning with this couse of time.